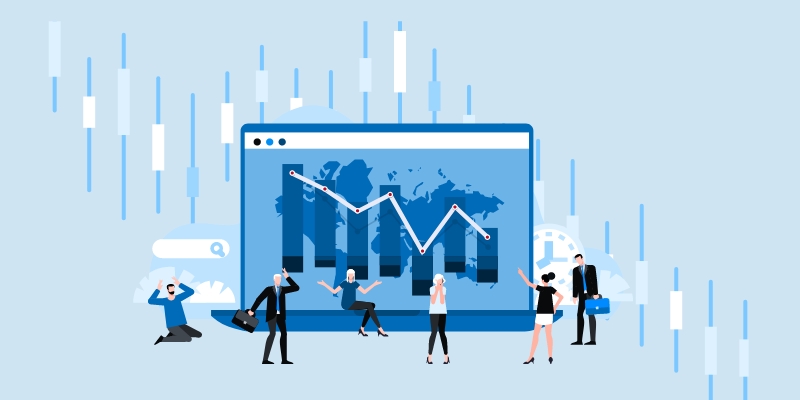 The US has weathered nearly 13 recessions since the second world war. And, the next recession may well be the most anticipated and the most debated of all times. In recent weeks, the internet has been ablaze with articles, opinions, and counter-opinions about whether the US is officially in recession. It only seems that everyone is trying to read the signals and predict the doom.

But, let us give you a warning. Make no attempt to make sense of the various economic indicators. By now, you should have realized that the signals are mixed and utterly confusing. Inflation is high, and interest rates are skyrocketing.

When there is a recession, spending will typically drop, affecting employment and other economic indicators. However, that’s not how things are. The employment rate is stable, and consumer spending is strong.

In fact, as per Labor Department data, the U.S. economy added nearly 263,000 jobs as of September 2022. These numbers are the lowest since April but are still more than what most leading economists predicted.

But what about the tech jobs? Does the prevailing economic uncertainty spell doom for tech? Or can the tech industry weather this wave?

Of course, it will. Here are 4 reasons why the tech industry is the most resilient to any economic crisis.

In light of recent big-tech layoffs and downward spiralling tech stocks, it is only normal for everyone to feel concerned if this is the beginning of the end of the tech sector. Considering that the tech industry has always been considered a bellwether for global economic health, this is quite understandable. But all is not gloom and doom yet. Given the industry’s remarkable resilience to economic crises, the odds are that Tech will certainly triumph over the recession.

Historically, recessions in the US have almost always been characterized by high rates of unemployment and huge job losses. But things may have changed for the better this time.

Despite global concerns about a possible economic meltdown, the tech unemployment rate has declined to 2.1%, according to this CompTIA analysis of the unemployment numbers published by the Bureau of Labor Statistics. 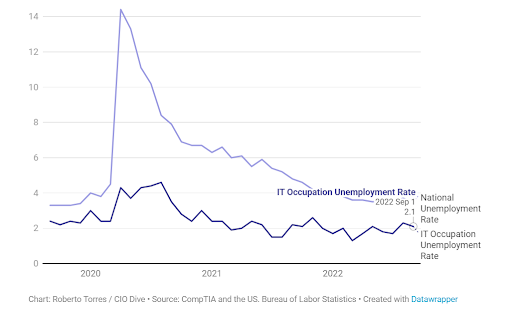 The same CompTIA report also goes on to confirm that with every layoff announced, there are companies clamoring to seize the opportunity of hiring skilled tech talent. Professionals with in-demand tech skills are in such high demand that companies are even willing to pay a premium to poach each other’s tech talent.

So, with companies grappling with talent shortages, it’s highly unlikely that tech hiring will slow down. In the State of IT report released by Spiceworks Ziff Davis, at least 58% of the surveyed IT leaders (director and above) have confirmed facing challenges in hiring skilled tech talent.

With such a talent crunch, approximately one-third of IT departments in businesses worldwide are expected to add more tech staff in 2023.

Tech Budgets Are Still a Priority

The research from Spiceworks Ziff Davis further revealed that nearly 50% of the surveyed tech organizations have plans to increase their IT budgets in 2023. The survey concludes that IT budgets may increase by 13% year-on-year in the coming year. This means that the need for technology is not going to shrink anytime soon.

The world is moving towards digital technology at breakneck speed. The rise of the metaverse, Internet of Things, and, more recently, Web 3.0 only mean that the demand for top tech talent is not going to cease anytime soon.

Meta is planning to launch its digital wallet as an independent app in 2022. The company also has plans to foray into the wearables and AR market. Amazon is on the verge of introducing Upay – its new payment solution and is also upbeat about its expansion plans in the areas of games and AWS. The expansion, when it happens, is expected to generate at least 2500 jobs. As Walmart looks to diversify its investments in DevOps, Cloud, Data and Security, the company recently announced its plans to hire at least 5000 tech professionals for cybersecurity, data science and software development roles.

These announcements just confirm one thing. While the tech industry might just be getting a bad rap, the recession can’t stop the need for technology.

While mass tech layoffs or rescinding job offers are a matter of grave concern, they seem isolated and more indicative of organizational setbacks than a harbinger of doom for the tech sector.