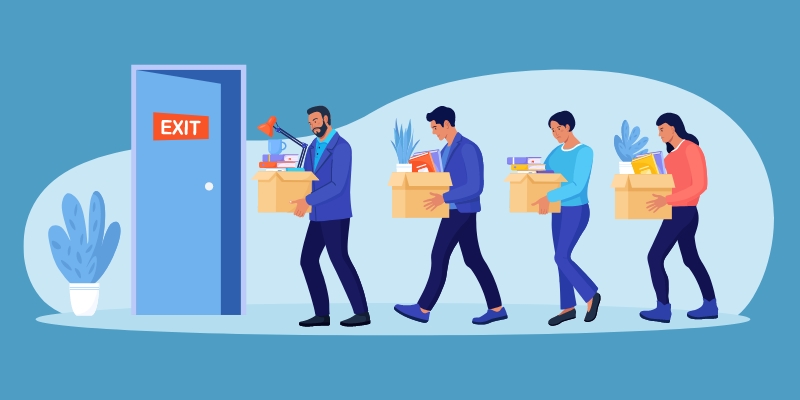 Job cuts in the tech sector spiked by 46 % in September, amounting to nearly 30,000 jobs- a significant increase from the number of layoffs in August. Adding to the woes, the number of companies with hiring plans spiraled to the lowest level in decades.

How have the layoffs panned out in September? Approximately 29,989 jobs faced the axe in September 2022. This is the largest number of layoffs in three months, and a massive jump from the 20,485 job cuts in August, and 67.6% higher than the 17,000 odd jobs axed last year.

Statistics show that retailers had the largest number of layoffs- 9,273, to be precise, followed by tech companies with 4,212 layoffs.

Here’s a compilation of the US-based tech organizations that have laid off employees from September to mid-October 2022.

The Washington-based tech giant first announced a layoff that would impact less than 1% of its 180,000-strong workforce. It dealt another blow to its staff by announcing another layoff that would further reduce its workforce by 1%. The cuts are expected to affect the organization’s modern life experiences team.

Nearly 22,000 Intel employees faced the axe following its dismal financial forecast in July. Intel blamed the financial downturn on the rapid economic decline. Furthermore, the company’s shares plummeted to $25.04, which is more than half its value last year.

As per Oracle’s documents filed to the state’s Employment Development Department, the company is laying off two hundred and one employees. However, this announcement came two months after the company laid off an undisclosed number of its staff from its 143,00-strong workforce, as a part of a larger layoff plan.

Although Meta says it is “firmly committed to New York”, things seem otherwise as the organization plans to shut down its operations in Manhattan. This decision comes a week after Meta went ahead with a hiring freeze. The Wall Street Journal also reported about Meta’s department reorganizations. The company has also given more than 83,000 employees a month to apply for jobs within the company.

On September 21, 2022, the search engine giant notified about fifty employees to find new internal roles if they wanted to continue working for the company. These employees comprise nearly half of the staff at Google’s Area 120, the company’s startup incubator.

Nearly 670 DocuSign employees will lose their jobs, according to a company announcement made on September 28. The company says the layoffs are “necessary to ensure we are capitalizing on our long-term opportunity and setting up the company for future success.”

7. Udacity
Approximately 13% of Udacity’s employees were laid off.

As a cost-cutting measure, Rev.com laid off 85 employees.

Following is a list of U.S. tech companies that laid off employees in September 2022. Layoff and workforce figures are based on reporting and are estimates only.

Is the Tech Sector Losing Speed?

Maybe. The slowdown and the potential layoffs from big to small companies indicate tough times ahead for the tech industry. The looming threat of recession, rising inflation, and a badly shaken economy may bring more slowdowns, according to analysts. Moreover, there hasn’t been much change since Meta, Amazon, and Netflix reported mixed results in their last earnings round.

Is There a Silver Lining?

Let’s take stock of the reality of the situation. Between April and September 2022, more than 300 tech giants and startups laid off staff instead of a mere twenty organizations in the first three months. However, in this period, the staff cuts at bigger plates like Paypal and Netflix were relatively minor.

Fortunately, aggressive interest hikes implemented by the Federal government came like a blessing with only 44 companies laying off staff in September. It seems like the massive layoff tsunami is abating, albeit slowly. Although the tech industry is going through tough times, the layoffs may soon come to an end.

Can the Global Recession Shake Up the IT Industry?
November 2, 2022