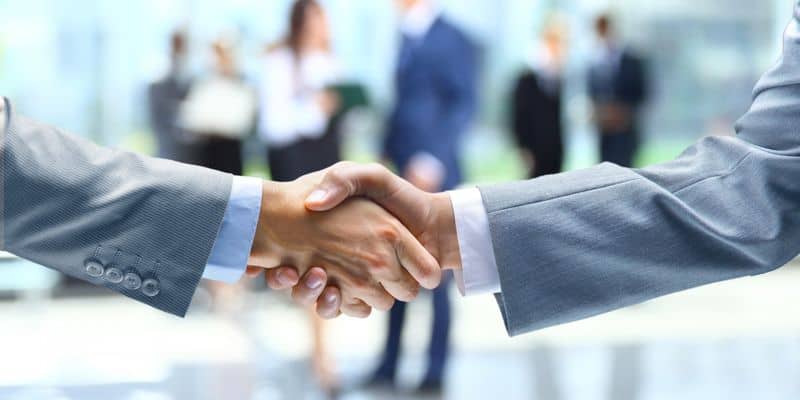 Suit or Tee-Shirt is an examination of the pros and cons of formality in business.  Today we’ll take a look at the tried and true contract or the less formal, friendly handshake.
There’s an idea about business that seems to speak to a lack of trust in the world of business.  Some archtypical grandfather might bemoan the loss of trust, or the degredation of “a man’s word.”  Business and exchange is all based upon agreements.  The trade of goods or services for money.  More and more we look to business to come out of an ivory tower and become more approachable.  Extend a hand rather than enforce shackling contracts.  However, the traditional method still holds it’s own benefits.

PROS:
The contract is the tried and true method of ensuring business arrangements go according to plan.  The message is made abundantly clear:  “I will do this, you will do this by this time for this much.”  The contract creates a very clear benchmark by which quality can be measured.  More importantly, it creates a structure through which any breach of contracts can be negotiated.
CONS:
There is an inherent lack of faith in the contract.  Such formality says to both parties “Were this not in place, I’m not sure you’d do what you say or pay what you pay.”  Contracts also require legal steps to be taken which are both costly and verbose.  Contracts are very rarely written in clear and concise terms, instead they are written in a language which it seems only lawyers can understand fully.

PROS:  First and foremost, the handshake style of agreement is personable.  Both parties can feel more attached to the project and engage in more open dialogue regarding it.  The contract’s lack of formality also provides more flexibility with the definitions of roles.  If a new project member comes on board under one title, then switches to another – no level of paperwork has to be surmounted.
Cons:  The hand shakes strengths are also weaknesses, I’m afraid.  For all of the good the lack of formality does, if something unfortunate arises, there is little to no structure to protect any party.  Beyond that, it can also lead to exploitation.  Getting paid the same amount to work a number of jobs that were not agreed to.

As with anything, a synthesis of these two ideas generally is the best idea.  Use a handshake mentality with some level of legality to back it up.  Generally speaking, informal letters of agreement sent via email can be accepted as legal basis should anything go wrong.  Ensure that all parties are comfortable and ready to move forward with a mutual understanding.