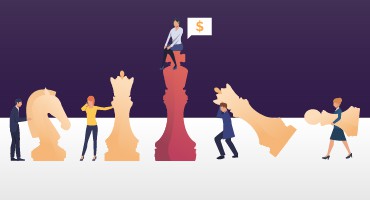 Being something of a history nerd, I have an original, early 1800’s topographical map of Europe on my desk – I often find myself cringing at friends’ uses of certain words.  “It’s historical context, not content” is one I’ve corrected a few people on. The big one is the difference between strategy and tactics.

Not preparing is preparing to fail. – Ben Franklin

In war, there are three major components – Strategy, Tactics, and Logistics.  Business – as the many re-writes of The Art of War indicate – is very much like war.  Taking that into consideration, we all need to be well versed in the importance of all three.

To approach victory, you’ll have to push yourself toward a grand goal.

Strategy looks at the map I mentioned before, a large scale vision of territory – or of a business plan.  It takes all of this into account and derives paths to overall execution.  Moving entire armies across countries – shifting entire business models, grand movements with little micromanagement constitutes strategic business development.

Tactics are executed by the leaders on the ground.  In modern combat, moving one soldier or one small group can completely alter the face and fate of the battlefield.  Keep this in mind as you approach your business.  You know the direction which will lead you to victory, but you need to get there through minefields and enemy troops.  Finish each project and up-sell on the next, delegate, hire, fire, make the minor adjustments that will lead you to each small victory – some of your most important victories – that will then take you to the big goal.

When Napoleon invaded Russia, he overextended his supply train and left himself hung out to dry.  The Russian army retreated and destroyed the crops which he might have used to supply himself.  Huge portions of his army perished to hunger, not battles with the Russians.  His great mistake was separating himself from his supply.

Never separate yourself from your providers.  Maintain your resource base or you are doomed to fail.

Powerful mistakes aren’t always made on the grand level, they’re made in minor fumbles, tactical missteps can be just as damaging.  However, without proper supply, even the most well executed of perfect plans will falter.  Finally, neither tactics nor logistics matter if you’re aiming at the wrong goal.  Balance all three for true success in your endeavors.